August saw the publication of What makes the monkey dance by Dr Stevie Simkin, Reader in Drama. The book, published by Jawbone Press, is a long overdue biography of cult country rocker Chuck Prophet and the band Green on Red.

Chuck Prophet started out as a post-punk California kid who helped kick-start the alt-country genre when he joined Dan Stuart’s Green On Red, then making a name for themselves as part of the so-called Paisley Underground. He has gone on to establish a reputation as one of the most respected solo artists of his generation.

Simkin set out to explore the music of Chuck Prophet and Green on Red by tracing the arcs of those careers within the context of seismic changes in the music industry over 40 years. He draws on hundreds of hours of original interviews as well as explorations of extensive audio, press and photographic archives to construct a book that is both a detailed biography and an industry case study.

What makes the monkey dance is available in paperback and e-book format. Find out more.

The human fallout of the fallout

Imagine being asked to watch not one but multiple nuclear test explosions - from nearby, and with nothing but sunglasses for protection. Between 1952 and 1991, over 22,000 servicemen took part in nuclear testing experiments. Most of them were conscripted to attend and they had no idea what was happening until they arrived. The tests took place at sites in Australia and close by, including Christmas Island. The men watched the explosions in awe and terror. One soldier wrote home that "the next bomb blast may well destroy the whole island - but at least it will be quick!"

What was the human fallout of the fallout - not only for the men who took part, but for their children too? What is the effect of knowing that your father was exposed to repeated nuclear testing? Gordon Murray, Senior Lecturer in Drama (Community Theatre & Media), has been exploring the nuclear veterans’ legacy. Both an academic and a playwright, Gordon has been gathering stories from the children of the soldiers ordered to stay on Christmas Island during the tests in the ‘50s and ‘60s. He has teamed up with colleagues in the University’s Faculty of Arts and the British Nuclear Test Veterans Association to reenact those moments that would change lives forever. Part political campaign, part verbatim theatre and part museum exhibit, FALLOUT is an award-winning collection of audio pieces that mix original testimony with drama and narrative poetry. Together they offer powerful portraits of individuals who still feel the effects of the exposure their fathers were subjected to.

Many of these children still have health issues which they believe are due to the tests. One such child was the young Steve Clifford (pictured below), whose father served at the Christmas Island tests. A leukemic child, he is now a digital artist, and in this image his younger self holds a model of the Valiant Bomber that carried the bomb his father witnessed. Behind him is the National Radiation Protection Board’s report on the links between radiation exposure and childhood leukaemia. 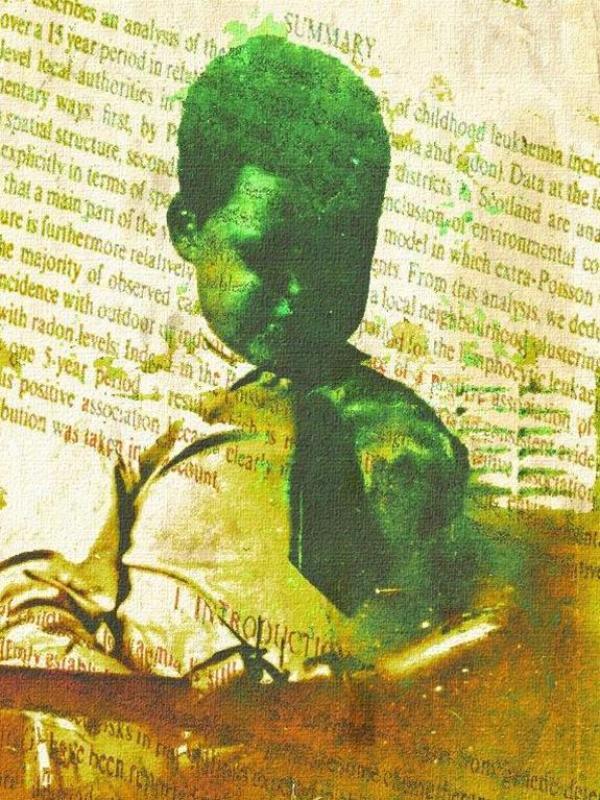 CPPR's Prof. Millie Taylor has struck up a colloraboration with photographer Martin Nangle for an evocative exhibition featuring photographs by Nangle and a sonic installation by Prof. Taylor. Citizens’ Wallpaper, which was on display until 28 March at Flowerfield Arts Centre in Portstewart, N.I, used citizen journalism, photojournalism and sound art to document the natural phenomena and communities of the north coast of Northern Ireland, from Inishowen to the Giant’s Causeway. The creation of a 65m canvas reflected contemporary culture, tradition, citizenship and identity from the Atlantic Ocean to the Irish Sea. The exhibition was produced by the Associated Photojournalism for Art and Culture (APAC) with funding from the Arts Council of Northern Ireland and Community Relations Council.

Read Prof. Millie Taylor's blog about her collaboration with Martin Nangle and the exhibition.