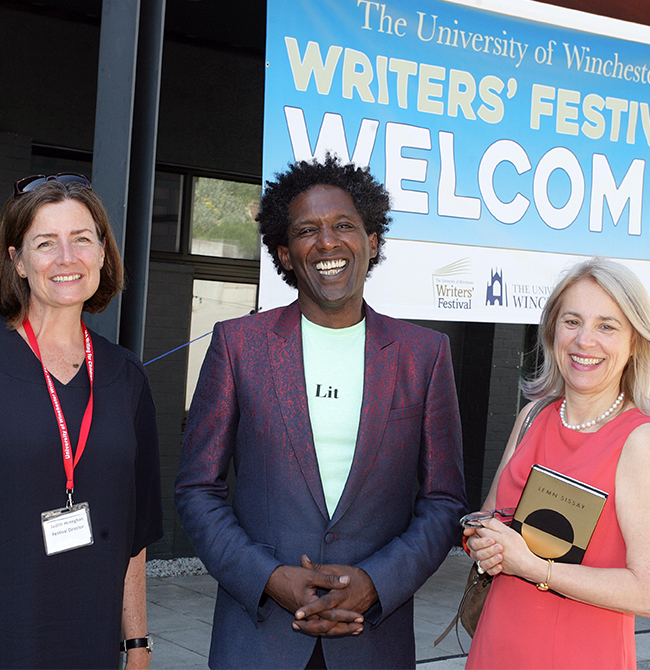 Judith Heneghan, Festival Director and Senior Lecturer in Creative Writing at the University of Winchester, said: “At the heart of Lemn’s speech was his electrifying performance of two poems – ‘Mourning Breaks’ and ‘Invisible Kisses’ – alongside a powerful message about creativity permeating and driving each one of us, every day, whether or not we regard ourselves as artists. He went on to reflect that writing is a team sport in that we depend on a network of other writers and, of course, readers and nowhere is this more evident than at the Winchester Writers’ Festival.”

Lemn Sissay is the author of several collections of poetry alongside articles, records, public art, and plays. His most recent collection, Gold from the Stone, was published earlier this year and is a selection of his poetry from age 16 to the present day. His Landmark Poems are installed throughout Manchester and London in venues such as The Royal Festival Hall and The Olympic Park, he was an official poet for the London Olympics and his specially commissioned poem Listening Post concluded the National Commemoration of the Centenary of the Battle of the Somme in Manchester in 2016.

Attendees were riveted by the after dinner speech by former criminal barrister-turned-crime novelist Helen Fields, who described how she draws on the humour and quirks of the courtroom, as well as its darkness, to create multi-layered characters. Other highlights included a drop in session with Susie Menzies, co-acting Head of Drama for BBC Wales, the 'Meet the Editors' panel chaired by Mslexia Editor Debbie Taylor, and the Festival's two open mics.

Attendee writers also had the chance to meet with over 35 top literary agents and commissioning editors for one-to-one appointments, as Judith explained: “The experience can be intense for an emerging writer, but all our industry experts are supportive and approachable. Attendees commented on feeling energised by these encounters, with constructive feedback and commercial insights to help them develop their work over the coming months and many requests to see completed manuscripts. I’m delighted the Festival can deliver such exciting opportunities and I look forward to seeing these writers continue to develop and flourish.”