Petr Masherau: From Partisan to Party Leader in Soviet Belarus

In 1965, Petr Masherau (in Russian: Masherov), a charismatic war hero and former partisan, became First Secretary of the Belarusian Communist Party. As leader of Soviet Belarus, Masherau presided over a period of unprecedented prosperity and modernisation in the republic, and his sudden death in a car crash in 1980 brought forth an outpouring of national grief - as well as rumours of Moscow’s involvement. His memory has proven remarkably enduring.

Funded by a British Academy Mid-Career Fellowship, Dr Natalya Chernyshova (Department of History, Modern History Research Centre) is currently writing the first scholarly biography of Masherau, his life and leadership. This will constitute the first detailed exploration of late socialist Belarus, an important borderland republic of the Soviet Union. The project, and a host of associated public engagement activities (see below), aim to improve our understanding of this strategically critical and politically volatile country today.

'The West needs to appreciate how the protest movement in Belarus has been shaped by the Soviet past.' Policy paper with History & Policy at the Institute for Historical Research in London. 5 March 2021.

'Belarus remembers'. Article in the January 2021 issue of History Today, the Leading popular history magazine in the UK.

PONARS Eurasia links academic researchers with policymakers on Russia and Eurasia. Based at George Washington University’s Elliot School of International Affairs, they publish open-access Policy Memos series and podcasts on security, politics, economy and society in Russia and Eurasia.

'The Politics of Modernisation in Late Soviet Belarus’, research paper given at the Conference for Political Historians of the Post-War Soviet Union, University of Glasgow, 8-10 June 2022.

‘Petr Masherau: a case study in Soviet political leadership’, research paper given at the Annual Convention of the British Association for Slavic and East European Studies (BASEES), Cambridge, 10 April 2022.

Authored a video on the 2020-21 Belarus protests for PONARS Eurasia Online Academy (Institute for European, Russian and Eurasian Studies, The George Washington University, USA), May 2022.

Guest expert featured in the three-part Channel 5 documentary The Chernobyl Disaster, broadcast 24-26 May 2022

Interviewed by London-based Arise TV News Channel about Belarus in Russia’s war on Ukraine, May 2022.

Discussing Nikita Khrushchev with Katie Puckrik and Tom Fordyce (Crowd Network) in their history podcast series ‘We Didn’t Start the Fire’.  From 1953 until 1964 Khrushchev served as the First Secretary of the Communist Party of the Soviet Union. Is there more to this man than just shouting with a shoe in his hand?

Listen to the Khrushchev episode on Spotify or Apple.

Listen to the Malenkov episode on Spotify or Apple. Discussing the eruption of protests in Belarus alongside Nikolai Petrov (Chatham House) with Maria Lipman for PONARS Eurasia Podcasts (Lipman Series 2020) on 11 September 2020.

Listen to the podcast 'Understanding the Protests in Belarus'

'Belarus: protests, repression and the war in Ukraine', a public lecture for the Winchester Russian Circle, Winchester, 30 April 2022.

Speaker at 'The trajectory of Belarus: from popular protests to international provocations', Institute for European, Russian, and Eurasian Studies, The George Washington University, USA, 10 December 2021. Listen to the recording.

A public lecture on 'Belarus protests, national identity and the Soviet past' at the Havighurst Centre for Russian and Post-Soviet Studies, Miami University, Ohio, USA, 7 April 2021. (video link forthcoming).

Webinar 'Protest and Repression Around the Globe: A roundtable discussion on Hong Kong, Thailand, Russia, & Belarus'. Organised by the Los Angeles World Affairs Council in partnership with the UCI Forum for the Academy and the Public, Wende Museum, CEU Democracy Institute and the Index on Censorship. 10 March 2021.

'The crisis in Belarus: A discussion with Dr Natalya Chernyshova', a public lecture at the Russian, East European and Eurasian Center, University of Illinois at Urbana-Champaign, USA, 25 September 2020 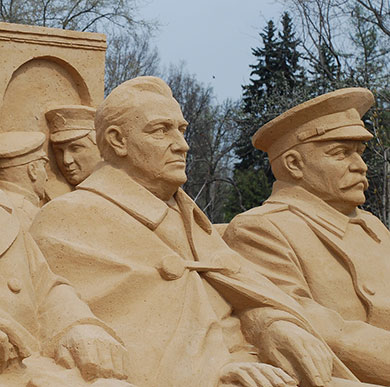