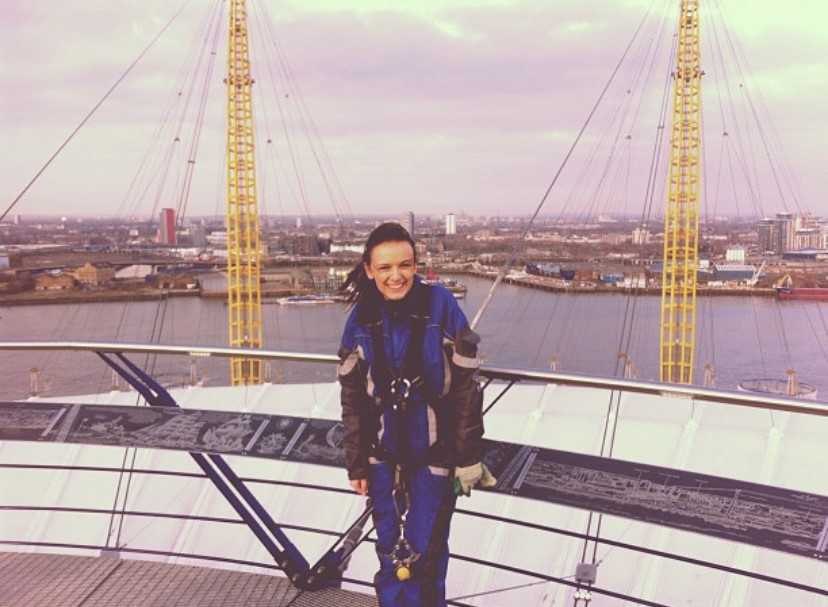 “I walked straight into a job whilst still studying at University and I couldn’t have done it without the experience at Winchester – going to Winchester enabled me to get the job.”

After graduating in 2013 with a BA Hons in Events Management and Business, Laura is now Head of Marketing and Ticketing at Northampton Saints RFC.

While studying at Winchester, Laura entered a business competition which paved the way for her to enter the working world. From there, she started the climb to where she is now. Literally.

“When I was at Winchester, I applied for a job through a spin-off competition based on The Apprentice.

“The biggest task was to climb to the top of the O2 arena before having a one-to-one interview with the employer of the job that we were competing for. Out of the 12 of us, I was the only one petrified but I still did it.

Laura started working as an executive for the company before she finished university.

She moved to London from Winchester for the role but soon realised the country’s capital wasn’t for her, and chose to relocate back home to Northampton six months later, to plan her next steps.

“When I moved home I worked at the Hilton, running the restaurant as Duty Manager. Then another Winchester student, who was based in Essex, emailed me saying ‘you should apply for this job’.

“And that job was a year-long placement as Marketing Intern for Northampton Saints who are a Premiership Rugby Club.

“The email wouldn’t send when I applied for the job, so I decided to visit the club in person to give them my CV. I didn’t know too much about rugby and the club itself so at first I mistakenly went to the football stadium down the road.

“I did eventually find Franklin’s Gardens – our 15,000-capacity stadium – and handed my CV to the hiring manager. I’ve been here ever since!”

As well as growing her knowledge, she has climbed the ladder – much like she did at the O2 – and now holds a senior position at the club.

“My job in London was a well-paid executive job and I left to then become an intern on a minimum wage, but it was a role that gave me an exciting opportunity.

“At the end of my year as a Marketing Intern I started applying for other jobs, away from the club, and the Commercial Director asked me ‘what are your plans?’

“After some honest conversations, I was offered a full-time, permanent position as the club’s Social Media Marketing Assistant, although I wasn’t actually assisting anyone! I was a one-man band, managing the club’s social media channels across Facebook, Snapchat, Twitter and LinkedIn.

“The knowledge I obtained from my degree in events certainly helped, and I developed our social media channels organically, which proved challenging. But we met our targets, and I then became Marketing Executive.”

Going from a focus on social media, Laura expanded to the wider marketing spectrum, supporting all departments of the club, including Ticketing, Hospitality, Retail, Sponsorship, Events, and Community.

Organisation, budgeting and sales are some of the key skills required in her role, and she can confidently say that her education and experiences at Winchester have helped her with these.

But it wasn’t all plain sailing. And she still remembers the advice she was given when she wanted to change her course.

“Going to Winchester helped me, 100 percent. I didn’t do events management at first, I did arts management. However, I wasn’t enjoying it, and I was supported fully when I wanted to change course.

“Winchester focuses on a broad spectrum of experience and academia. Being there allows you get your degree, but it also gives you time to gain experience.

“My lecturer told me to not let education get in the way of learning – essentially telling me that learning is more than just what happens in a lecture theatre - and I will never forget that.”

Laura integrated herself fully into university life and the associated community, working at the Student Union (SU) while studying.

Some of her best memories were made at the SU, one of those being the netball team she set up for her and her work friends.

“I created a netball team for SU staff - we wanted to start our own team rather than join the university team. The Vice President at the time became our netball coach and he would train us in the sports hall.

“I was employee of the year for the two years I worked at the SU. I loved working there and always seeing everyone.”

Following that trend, Laura loves her current role, too.

She’s had to step back to go forward on more than one occasion and hasn’t been afraid to do so. But she’s not finished yet, remaining ambitious for the future with the hope of carrying on her climb.

“My advice for students is to get experience as well as your degree. Have fun while you’re there, don’t make everything about your course and, if you don’t like something, change it. I changed my course and my career path.

“I’m now in a fortunate position of loving my job. If there weren’t any career development opportunities, then I would leave. But I definitely see room to grow - I don’t see why I can’t be the first female CEO of Northampton Saints.”