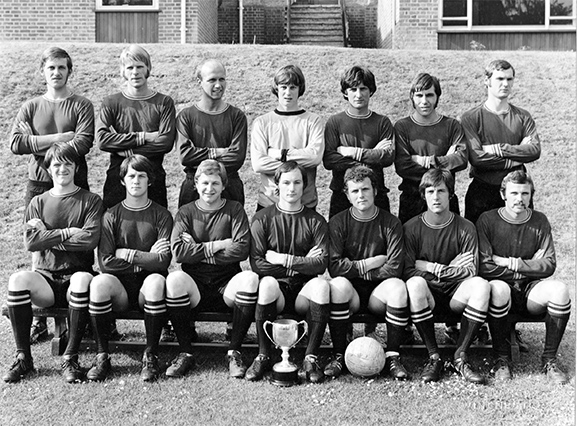 In 1969, at the tender age of eighteen, I embarked on a teaching career, choosing King Alfred’s College (KAC) - now the University of Winchester - to undertake the mandatory three-year teacher training course. The nation was still gripped with football mania – after all England still held the Jules Rimet Football World Cup. I was one of those football maniacs and the obvious subject for me to pursue was Physical Education. KAC's reputation as a teacher training college was second to none but sadly it struggled to compete with physical education wing colleges such as: Loughborough, Leeds Carnegie, Borough Road or Cardiff. In modern-day football parlance they were ‘Premiership’ and we were ‘Championship’.

Before applying to college my dream of becoming a professional goalkeeper had been dashed at Barnsley Football Club – I was a bit short. On arrival at King Alfred's I was delighted to be selected to play for the first eleven. The team was composed of older physical education students, most of whom had had considerable experience with the beautiful game. They were all good footballers; indeed, Micky Mellows was a current England amateur international and later played professionally for Reading and Portsmouth. Our team captain, Rod Manchester, was a fellow Yorkshireman who originated from Huddersfield. From the onset of the season Rod was fixated with the Mitre Cup. Most football buffs were familiar with four national football trophies: the FA Cup, the Amateur Cup, the English Schools Cup and the Mitre Cup which effectively was the national collegiate championship. Rod insisted we were going to win it - we didn’t believe him. After all. we were only a ‘Championship’ team and we would be up against the big boys of college football. Preliminary friendly fixtures were played against colleges, universities and army teams before the cup competition started. With Rod’s eternal confidence and encouragement, we did well and synergy started to develop; we began to believe that we just might be a ‘Premiership’ team in the making.

After fifty years my recollection of the early rounds of the Mitre Cup has evaporated.  The first match that I can recall was an away tie against the very proficient Saint Mary’s Twickenham who we defeated 3:0. As the quarter final loomed, training on the Ditch and in the gym increased with Rod driving us beyond human endurance. The quarter final was a home fixture at Bar End against Borough Road, Isleworth. They had a formidable reputation and were captained by Billy Salkeld who the previous year had captained the England Youth International team. Coincidentally we had both been in the district, sixth form college and county representative teams. I believe he was not the only school boy international in the Borough Road team. They were a team to be feared but Rod was having none of it – we were going to beat them, and we did 4:2!

Swindon Town’s reserve ground was the neutral venue chosen for the semi-final. This provoked Rod to increase the training regime beyond superhuman endurance; after all, we were to play Cardiff College. It was rumoured they had won the Welsh Amateur Cup and had seven Welsh schoolboy internationals in their team. They arrived at the ground full of misguided confidence singing Cwm Rhondda as they filed into their changing room. Once again Rod was having none of it, we were going to win and we did 1:0.

By this time football mania was spreading through the college and when it was announced that we were to play Alsager College, Crewe, at Rugby Town’s stadium in late spring of 1970, we had no trouble in filling three coaches of supporters for the evening fixture. I plucked up courage and asked a very pretty young art student Barbara Morton if she would go to Rugby and to my surprise and excitement, comparable to the match itself, she agreed.

Alsager was also a ‘Championship’ team and having defeated a number of the big boys on the way to the final, we were very confident we were going to beat them. We were slightly deflated when the match, after extra time, ended in a 1:1 draw and the cup had to be shared. After the match I was bold enough to kiss Barbara; it must have done the trick because after 50 years we are still together.

Rod’s inspirational leadership undoubtedly propelled us to the cup final. He was almost correct in his assertion that we would win the Mitre Cup outright. Even though half a century has now passed, his contribution, and that of his team, to one of King Alfred's College's most significant sporting achievements must not go by unheralded