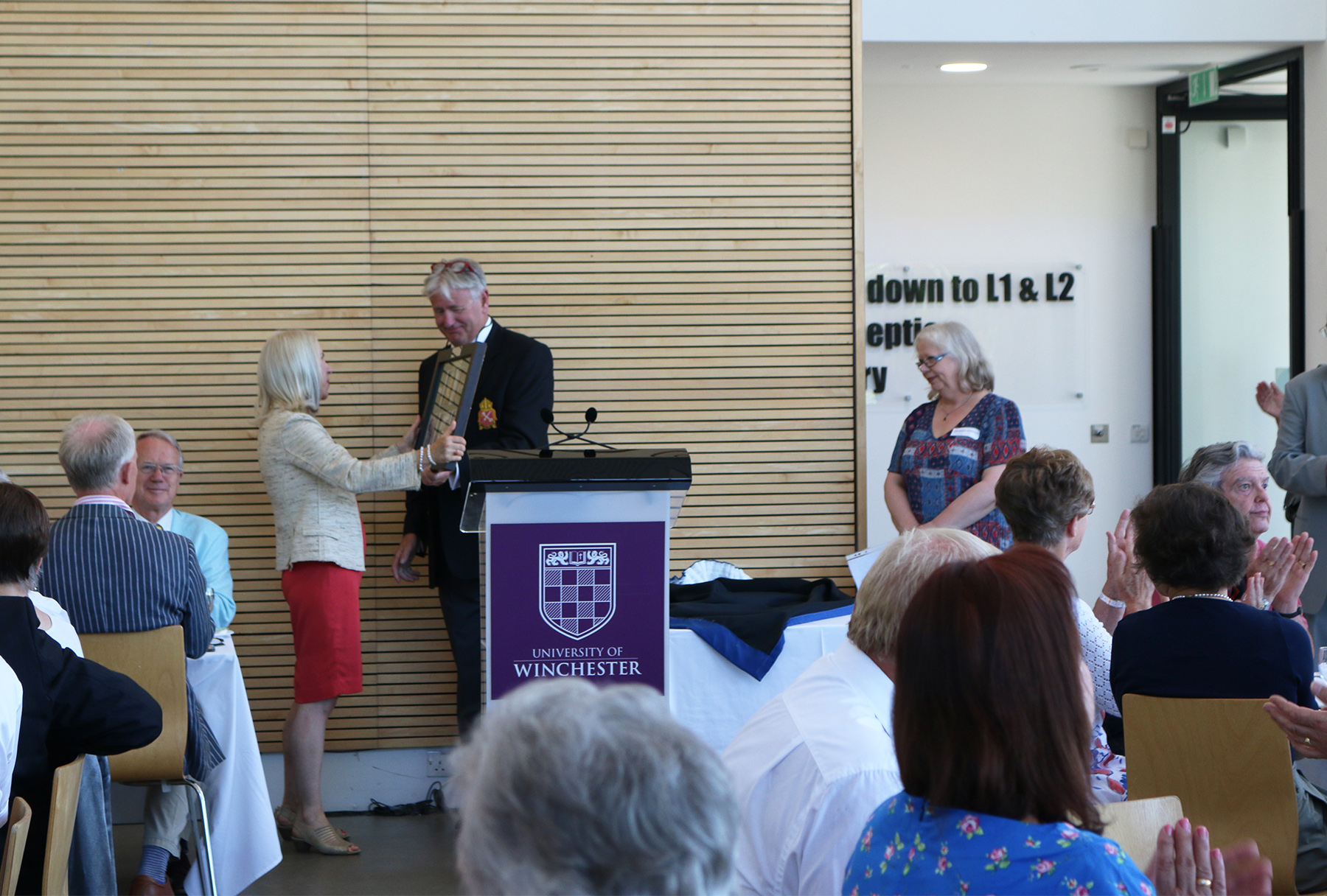 The launch was marked by a generous donation from Peter’s family to the Winton Club and University of the medals of Merton Alfred Rose, one of the Wintonians who lost his life in the Great War. The presentation includes the Military Cross awarded to Merton for his gallantry.

The project sprang from a suggestion in a Facebook group formed by alumni who studied at Winchester in the 1970s. Realising the strength of the bond that exists between Wintonians, another special group of them came to Peter’s mind as the centenary of the Armistice approached – those who died during the Great War and are commemorated in the Chapel. Peter says “I was convinced that they had a story to tell and that this was the right time to tell it”.

Martial Rose (Principal 1967-84) who has supported the project throughout, wrote the foreword on the website which concludes with the words “these 60 men….are here remembered and honoured: Wintonians by Wintonians”.

Dee read out an abbreviated version of the project’s memorial for Merton, describing his idyllic early childhood and schooldays in Swanage and his well-ordered student life at Winchester Training College. At that time there were just 82 students and most were enrolled in the College’s Royal Hampshire Regiment Territorial Company. When War was declared, the students were on summer military manoeuvres and were immediately mobilised. Following a short illness when Merton was split from his fellow Hampshire Regiment students, he served in the Royal Warwickshire Regiment on the Western Front. Dee’s account continues:

“He was commissioned as a Second Lieutenant in 1917. Only two months from the end of the War he and his men were engaged in fast-moving, open-field warfare, pushing German forces eastward, around the River Lys on the France-Belgium border. After twice advancing when other units had failed, Merton and his men were ordered to clear out the enemy positions in a copse and two farmhouses. This was accomplished but Merton was wounded. For his gallantry Merton was awarded the Military Cross. The citation reads:

He carried out a reconnaissance personally in broad daylight under heavy fire, and then led his platoon forward with great gallantry and successfully outflanked the enemy’s position. He was afterwards severely wounded while attending to a wounded man.

Merton lies in Aire-sur-la-Lys Cemetery. He is remembered on the Swanage Memorial, in our College Chapel, and here, today.

We will remember them.”

The project’s memorial for Merton Rose can be seen in full at the Winchester Training College - Roll Call of the Fallen 1914-1918 website.