2021 at the University of Winchester

2021 saw the return to campus for students and staff as lockdown restrictions eased. With another successful and busy year now behind us, here we look back at some of the key moments at the University of Winchester over the last 12 months.

Vice-Chancellor Professor Joy Carter announced her retirement after 15 successful years leading the University. As well as overseeing growth and embedding quality and business excellence across the institution, Professor Carter established the University as a leading values-driven institution during her tenure.

We became one of the first five universities in the UK pledging to support Gypsy, Traveller, Roma, Showman and Boater communities in higher education, signing the new GTRSB into Higher Education Pledge.

This month came the sad news of the death of Martial Rose (1922-2021), who headed up the then King Alfred's College for two decades from 1965. He was a dynamic, creative, forceful, and determined leader at a critical juncture in the institution's history.

Vice-Chancellor Professor Joy Carter was one of 20 top scientists signing an open letter to Prime Minister, Boris Johnson. This called for much stronger leadership in the face of catastrophic climate change and growing ecological collapse, tabling an earlier net zero target of 2030 rather than 2050

We were glued to the live final of ITV's The Voice UK television singing competition to watch University of Winchester alumna and former creative director of the University Music Centre Hannah Williams, who was competing. Mentored throughout the competition by Sir Tom Jones, Hannah gave an outstanding performance in the final although Craig Eddie was crowned the winner in the public vote.

On Stephen Lawrence Day (22 April), we announced we had signed the Race Equality Charter, demonstrating our commitment to tackling racial inequalities within the higher education sector. The Charter aims to improve the representation, progression and success of minority ethnic staff and students within higher education.

Our ground-breaking work in sustainability and social responsibility in education placed the institution second in the UK for Sustainable Development Goal 4, Quality Education, in the global University Impact Rankings 2021 compiled by Times Higher Education.

The University joined an international project which saw students working with a team of experts to revisit historical unsolved crimes as part of a unique project investigating 'cold cases'. The project followed the establishment of a new Cold Case Unit at the University, where students studying on forensic investigation programmes undertake cold case investigations supported by the academic team.

With the climate emergency at the top of the global political agenda as we approached the COP26 climate conference, we livestreamed four original short plays focusing on human stories at the centre of the issue of climate change. Climate 4 Change 2021 was written and performed by students studying creative writing and performing arts.

We joined a unique global UNESCO network which encourages children to think more deeply by engaging with philosophy in the classroom. As a partner in the UNESCO Chair on the Practice of Philosophy with Children, based at the Université de Nantes in France, experts in education at the University collaborated with other leaders in this field of teaching around the world.

We were one of five finalists in the Social Enterprise Mark CIC 2021 Making a Mark Competition, which recognised social enterprises' responses to the Covid-19 pandemic. We highlighted our vast support package/offering for students and staff, as well as the local community. One highlight was our provision of over 90 rooms in vacated campus accommodation situated close to the Royal Hampshire County Hospital (RHCH) to NHS frontline staff who were unable to stay in their own homes, as well as car parking spaces.

We made big strides on our aim to become one of the lowest carbon emitting universities in the UK, following the award of a £3.1 million grant from the Public Sector Decarbonisation Scheme. The grant signalled the start of a major capital investment programme in innovative low carbon plant and equipment.

This month, the University Chapel won a Gold Eco Award for its work in sustainability. It is the first Gold award for a university chapel from the project, which is run by Christian environmental charity A Rocha UK.

The University of Winchester Business School was awarded the Small Business Charter Award in recognition of its support for small businesses, student entrepreneurship, and its commitment to the local economy.

Students who finished their studies last year during the pandemic finally had a chance to graduate this month, as the University hosted Graduation ceremonies at Winchester Cathedral. More than 2,000 students graduated over 17 Covid-safe ceremonies.

We welcomed the Minister of State for Universities, Michelle Donelan MP, who visited to view first-hand the exceptional quality of the University's teaching and health and social care degrees and meet some of the outstanding students studying to become the next generation of teachers and nurses.

The Winchester Health Clinic - established by the University of Winchester to provide high-quality physiotherapy assessment and treatment to the local community - opened for bookings in August. Based in the new Winchester Sport and Leisure Park at Bar End, the Clinic is set to become a leading provider of physiotherapy services in the city.

£1,000 of unopened food and 171 bags of clothes, household items and kitchen equipment, weighing roughly 1.2 tonnes, were donated by our students living in University on-site accommodation in this year's Bag it Up initiative. Two van loads were dropped off to Winchester Basics Bank to help people in need in the city.

Our Business School became one of the first in the UK to deliver the Government's Help to Grow: Management executive development programme. The programme, which is part of the UK Government's Plan for Jobs, aims to support senior managers of small and medium enterprises (SMEs) to scale up as the country recovers from the Covid-19 pandemic.

A pop-up vaccination clinic took place during Welcome Week, as new students arrived for their introduction to university life. The clinic was part of a drive to encourage students and staff to receive a Covid-19 vaccination before the start of the new academic year, with staff from Solent NHS Trust on hand to administer Pfizer vaccinations.

Undergraduate students expressed their hopes about a sustainable future for the planet in a film which was shown at COP26. The film was part of the Future Visions challenge, a project led by Learning@TheGrange in collaboration with WWF. The creative project has amplified the voices of nearly 250 young people aged seven to 23 years in response to the global climate emergency.

A new 'Creativity Collaborative' in Hampshire secured a £360,000 grant from Arts Council England this month. The Collaborative is made up of the University, the University of Winchester Academy Trust (UWinAT), including the lead school Halterworth Primary, and an extensive network of Hampshire schools and will help revolutionise creativity across the curriculum in schools. 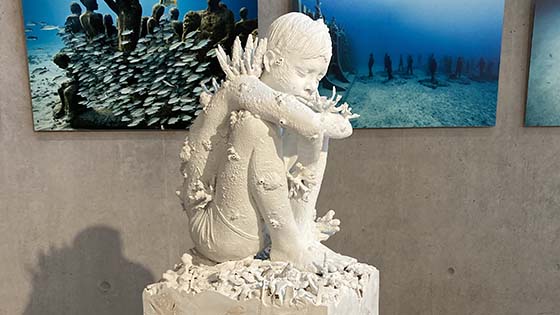 The new gallery space in the our West Downs Centre opened to the public for the first time to enjoy an exhibition with climate change as its focus. We Are Nature featured photographic prints and maquettes by internationally renowned sculptor Jason deCaires Taylor. Taylor's large scale underwater installations can be found across the world, attached to the seabed, slowly transforming into thriving habitats for marine life.

We marked Black History Month with a short series of podcasts. The Inside Out brought together student voices for open and honest conversations about race and diversity.

Physiotherapy students and staff were praised by Deputy Lord Lieutenant of Hampshire Sir Freddie Viggers when he visited the University's physiotherapy suite in Winchester High Street. Sir Freddie thanked students and staff for the commitment they showed to their studies and profession during the Covid-19 pandemic. Teaching on the course continued in a Covid-safe way with students undertaking placements in frontline physiotherapy services across the region, to help keep services running and support clinicians and practitioners.

For the second time this year, we celebrated student achievements and honoured public figures at Graduation ceremonies for the Class of 2021 at Winchester Cathedral.

The crucial United Nations Climate Change Conference COP26 took place this month and the University - a member of the COP26 Universities Network - got involved in a number of ways, both at the event in Glasgow and back on campus in Winchester.

A small group of students attended a variety of events in the COP26 Green Zone at the Glasgow Science Centre, took part in the Global Day of Action for Climate Justice march, as well as events organised by the Climate Coalition and Extreme Hangout, and documented their visit with a takeover of the University's social media channels. Professor Robert Beckford, Director of the University's Institute of Climate and Social Justice, took part in Christian Aid's special service at Glasgow Cathedral where he addressed the congregation. The University was a sponsor of a performance by the Kingdom Choir of Marvin Gaye's Mercy Mercy Me, which was written in 1971 and is one of only a few soul songs about the environment.

Later in November, we hosted Winchester District's first-ever Young Person's Climate Assembly at our West Downs Quarter. Over 25 young people aged between 16 and 30 who live, work and study in and around Winchester came together to send a message to local decision makers about climate change and the urgent need for action.

At the end of another busy year, we bid a warm farewell to Alan Titchmarsh MBE VMH DL, who reached the end of his term in office as our Chancellor after six years. The broadcaster and writer was a dedicated and much-loved Chancellor since he was installed in the role in 2015.

We congratulated Lucy Collier, a newly-qualified social worker who is a graduate of the Winchester Step Up to Social Work programme, when she won the student social worker of the year award. Lucy is a disability social worker with Portsmouth City Council and received the award for her role in supporting families who require respite as part of their care packages.

Finally, Ginkgo seeds from a tree that survived the nuclear attacks on Japan at the end of World War Two were planted at the University, as part of an international peace project. The joint Ginkgo Tree Project between the University, the Winchester Mayoralty and Winchester members of SGI-UK, was launched in August this year to promote peace, anti-bullying and sustainability in schools.