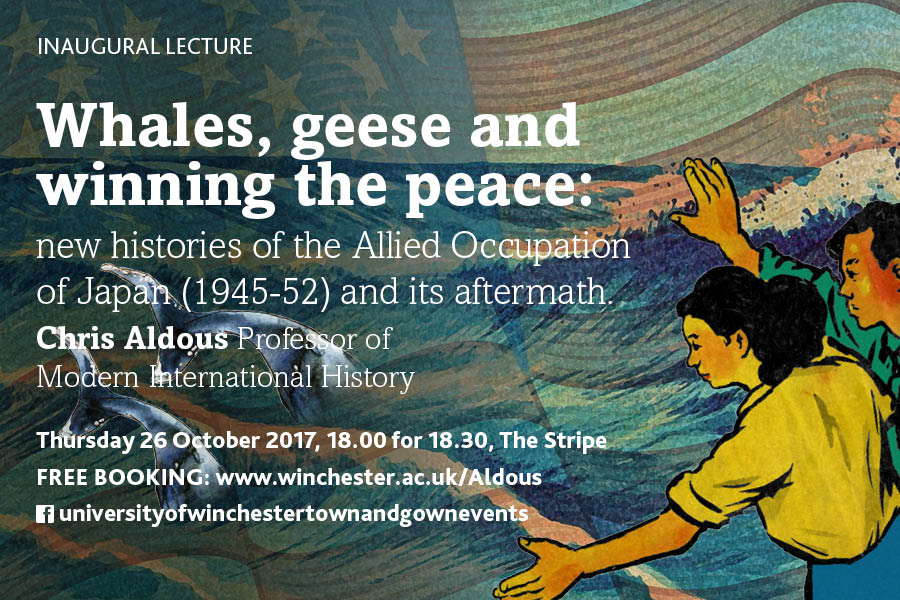 The crisis over food supply and nutrition during the Allied Occupation of Japan (1945-1952) is the subject of a public lecture by an expert in modern Japanese history at the University of Winchester.

Whales, geese and winning the peace: new histories of the Allied Occupation of Japan (1945-52) and its aftermath is the inaugural lecture by Professor Chris Aldous, Professor in Modern International History at the University of Winchester. He is also Head of the History Department.

His lecture describes how the food supply crisis was eased by the United States' policy to promote Japanese Antarctic whaling, but also complicated by the desire of many American servicemen to hunt Japanese wildlife for sport - when many Japanese were desperately trying to exploit it for food.

Although the Japanese public were grateful for the permission to resume Antarctic whaling, the behaviour of many US soldiers in the field caused resentment, suggesting a colonial mentality that undermined the American effort to win the peace.

This is a look at the social aftermath of the war, which has been little discussed as the programme of reform aimed at democratising Japan is more often the focus of studies of the Allied Occupation.

Professor Aldous first visited Japan in 1990 to research the post-war reform of Japanese policing as a postgraduate researcher undertaking his PhD at the London School of Economics. Since then he has been to Japan many times, mainly researching the early post-war period but also examining longer-term issues in US-Japanese relations, particularly in relation to the military presence in Okinawa. His interests in Japan have included policing and protest, public health and nutrition and more recently the debates around whaling and wildlife conservation.

Given by newly appointed professors, Inaugural Lectures provide a platform for them to inform academic colleagues, University staff, students and the wider community of their current and future research.

Whales, geese and winning the peace: new histories of the Allied Occupation of Japan (1945-52) and its aftermath takes place at 6.30pm on Thursday 26 October in The Stripe, King Alfred Campus, University of Winchester, Sparkford Road, Winchester, Hampshire SO22 4NR.

Refreshments will be served from 6pm. The event ends at approximately 7.30pm.

All are welcome. The event is free to attend but booking is required.