Why choose to rent when there are other options?

In our latest equality and diversity themed blog post, Joe Best, who recently graduated from the University with a first in Musical Theatre, explores how the HIV/AIDS epidemic in the USA in the 1980s has been represented in theatre productions.

No, this isn't an article that should be in the Financial Times, but instead raises questions about Jonathan Larson's musical - Rent.

Premiering on Broadway in 1996, the show received critical acclaim for its representation of the LGBTQ+ community and the HIV/AIDS epidemic that continued to plague New York City during this era. Whilst there had been many plays that brought the epidemic to the theatrical platform - such as Tony Kushner's Angels in America and Larry Kramer's The Normal Heart - Rent was often perceived as revolutionary because it was staged as a musical.

But, despite this, Rent's representation of HIV and AIDS is often considered problematic and it's important to understand why. Let's look at those characters in the show affected by the virus: Roger, Mimi, Collins and Angel. So far, so good - we have a healthy mix of cisgender heterosexuals (Roger and Mimi) and members of the LGBTQ+ community (Collins and Angel) - proving that the virus attacked an individual regardless of their sexual and gender identity.

However, let us now look at who dies from the virus: Angel - the liberating, homosexual, drag queen, who displays no life-threatening symptoms before their sudden death. In reality, they would be affected with Kaposi's sarcomas (violet/brown coloured spots that appear on the body) and usually suffer from wasting syndrome, where an individual loses over 10 per cent of their baseline body weight.

On the other hand, we have Mimi who briefly dies after making a dramatic reappearance during the finale of the show, only to be miraculously resurrected. The moral of this story: straight love is capable of overcoming the fatality of AIDS, whereas members of the LGBTQ+ community are doomed to tragically pass away; leaving their lovers behind to mourn their inevitable death. Whilst this may not have been Jonathan Larson's intention, advocates for HIV/AIDS awareness (like myself) can only logically draw this conclusion.

What you may not know is that several musicals existed prior to Rent's emergence. Let me introduce you to two shows that you may not be familiar with: William Finn's Falsettoland and Bill Russell and Janet Hood's Elegies for Angels, Punks and Raging Queens.

Falsettoland is the closing instalment in William Finn's Marvin Trilogy, which follows its lead character - you guessed it, Marvin - as he navigates his way through his chosen family, consisting of his ex-wife Trina, adolescent son Jason, gay lover Whizzer, his psychiatrist Mendel, and the lesbians from next door, Dr Charlotte and Cordelia. Within the show, Whizzer is the one affected by an unknown illness, which the audience knows to be AIDS.

With the musical taking place in 1981, the year of the epidemic's emergence in the US, little to no information was known about AIDS, meaning that those suffering from it during this period were often left in apprehension about their fate. This mindset is explored when Whizzer sings the aptly titled You Gotta Die Sometime, during which he begins to see Death as a friend who will relieve him from the pain he is experiencing. Much in the way that things worked out in real life (and not in Rent), Whizzer does pass away during the climax of the show, with the finale being an intimate duet sung between Marvin and Whizzer's ghost; with Marvin questioning 'what would I do if I had not met you'.

However, the epidemic is also presented as bringing people together in the face of tragedy. Despite there being a constant state of tension and conflict in the previous two instalments of the Marvin Trilogy, Falsettoland brings the story to a close with all members of the chosen family coming together as one unit; only to be left short a member upon Whizzer's death. 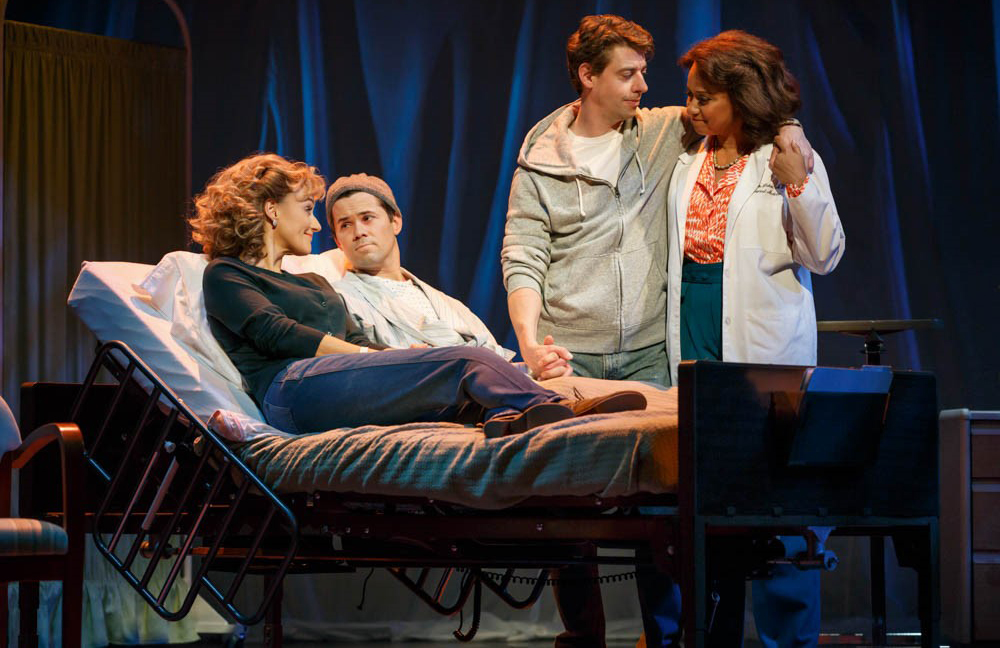 Elegies for Angels, Punks and Raging Queens is unlike the previous two shows in that it is a song-cycle, meaning that it does not necessarily feature a plot and characters that we follow, but is instead a collection of songs that are all based on the same theme. In this case, they are all songs sung by individuals that have lost someone to HIV/AIDS - primarily during the epidemic's height in the 1980s. Songs range from emotional soliloquies (And The Rain Keeps Falling Down and I Don't Know How To Help You) to empowering ballads (Celebrate and Heroes All Around), yet all succeed in capturing the truths of having friends and family pass away from AIDS during this difficult time. The closing lines of the titular song capture this perfectly:

'I long for a mix of the bad, old days - the ball gowns and torn up jeans.
And I sing this song for the souls who have gone:
sweet angels, punks and raging queens.'

The HIV and AIDS epidemic cannot be perceived as a brief historical moment within the LGBTQ+ community, and its importance should continue to carry weight in our lives today. People continue to be diagnosed with HIV to this day, due to naivety, carelessness and lack of education, meaning that its representation is always in demand. In addition, there continues to be stigma towards those diagnosed with HIV and this attitude can only be changed through the education of the masses. Shows such as those discussed here are the first steps in taking this taboo and sensitive subject and informing individuals in a medium that is not only entertaining, but educatory too.

Joe is pictured above second left in a production of Falsetto.