St Vincent (background image) is a Caribbean island, part of an island nation known as St Vincent and the Grenadines. Principal Investigator Dr Christina Welch, Reader in Religious Studies, has been carrying out community heritage research there, alongside Prof. Niall Finneran (find out more about their research in the Caribbean).

Established in 1765, St Vincent Botanical Garden (SVBG) was among the earliest tropical gardens in the world, and the first in the British colonial Caribbean. Dr Alexander Anderson (1748-1811), a Scottish surgeon and botanist, served as SVGB’s superintendent during its early development, from 1785 to 1811. Anderson was a man of his time: educated, inquisitive, and keen to make a name for himself. Travelling widely in the Caribbean, he recorded plants new to western science, introduced many plants into SVBG, documented the uses of various plants and exchanged observations, information and plants with many significant gardens and botanists of the time. Anderson’s letters, plant specimens, plant catalogues and Caribbean natural histories are held in London by the Linnean Society, Natural History Museum, Royal Botanic Gardens Kew and the National Archives. These have been mostly unavailable to SVGB or Caribbean scholars, as access currently requires an in-person visit.

The project (full title: Unearthing the contribution of indigenous and enslaved African knowledge systems to the Saint Vincent Botanical Garden under Dr Anderson [1785-1811]) will digitise the Anderson archives held by the Linnean Society and the Natural History Museum, including his important Hortus St Vincentii, which details the plants growing in SVBG in 1800 and includes a number of botanical illustrations. Several of these are by John Tyley, a young African Caribbean man; at this time, it was very unusual for botanical illustrations to be signed, especially by an Afro-Caribbean. To find out more about Tyley and the botanical illustrations, watch this video by the Linnean Society.

Digitisation of Anderson’s Caribbean natural histories, and his details of plants growing in the SVBG, will allow global online access to these important historic resources for the first time. The project will also interrogate the digitised archive against wider material - letters sent by Anderson held at Kew Gardens, and receipts relating to SVBG and further plant catalogues held at the National Archive. The entire Anderson archive will then be analysed to detect and document the contributions made by the indigenous (Carib/Garifuna) and enslaved African peoples whose knowledge and physical labour fed into successful development of SVBG, and western scientific knowledge more generally. Examples include Anderson gaining information about medicinally used plants from indigenous peoples and enslaved Africans whose work helped the garden grow from 350 plants species in 1785 to over 2000 in 1800. 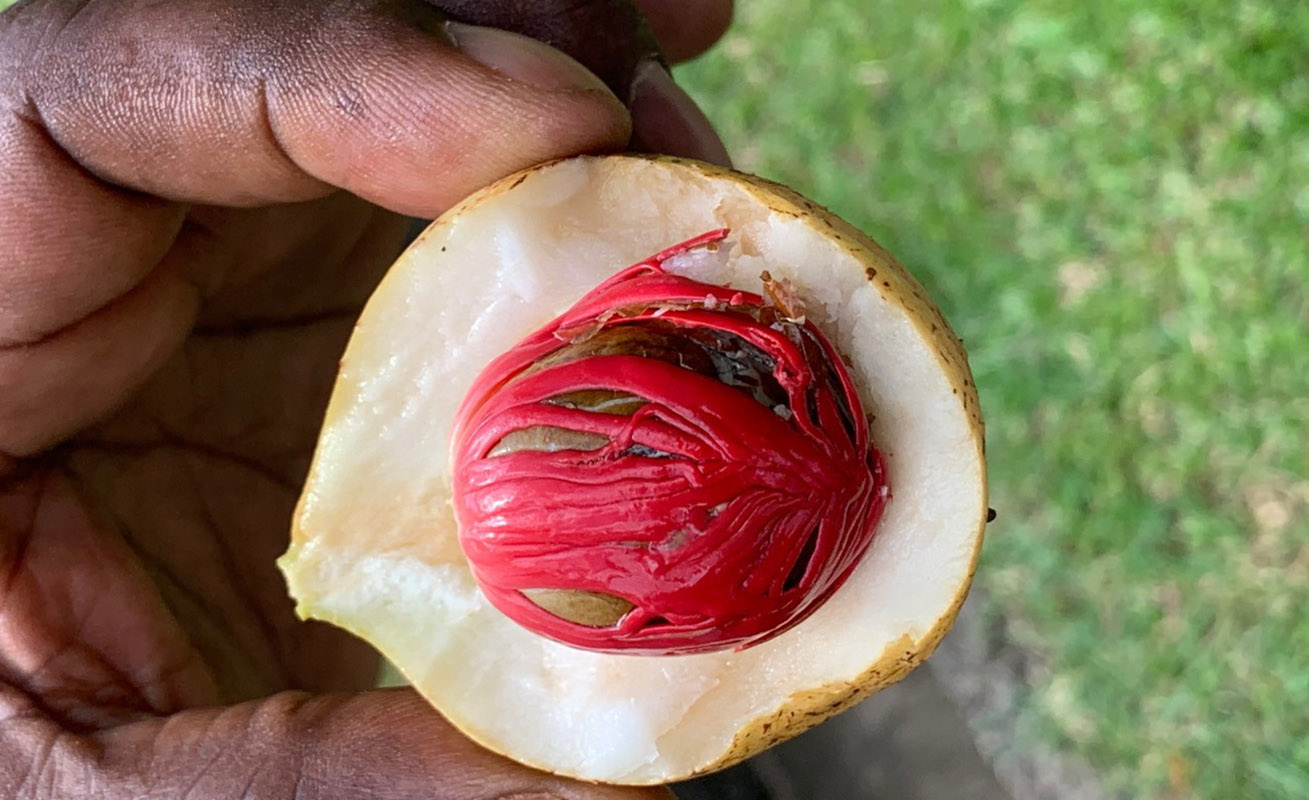 The fruit of the nutmeg

The rapid and continuous expansion of the gardens (its buildings and diversity of plant holdings) speaks to the effort, insights, and knowledge of indigenous and enslaved African peoples. Additionally, Caribbean plants introduced to Anderson by indigenous people were described scientifically based on Anderson’s collections, and as such the local names and uses of these plants, and those of plants introduced from Africa, were credited to Anderson rather than indigenous and enslaved African people. The project aims to rectify this and give credit to those who helped Anderson’s garden flourish, and then share this information globally. 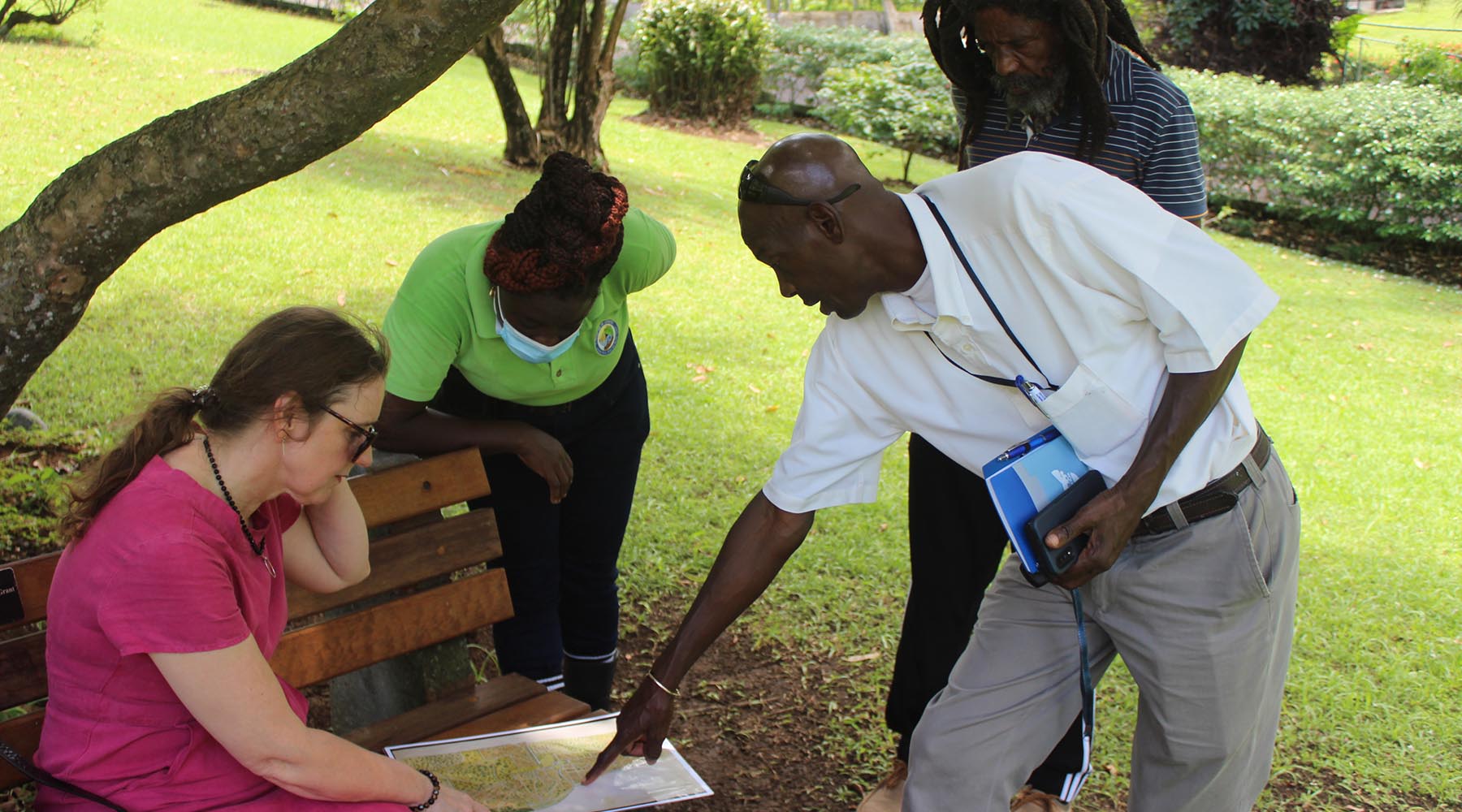 Dr Tina Welch with Mr Andrew Lockhart (Director of National Parks, National Park, Rivers and Beaches Authority), Rasta (St Vincent and Grenadines Leeward Ranger), and one of the Botanical Garden gardeners looking at the c. 1800 map of the St Vincent Botanical Garden, courtesy of the Linnean Society, London, during a visit in Sept. 2022.

The project will create a public pop-up exhibition in order to tell some of the histories hidden in Anderson’s archive and celebrate how indigenous and enslaved African people contributed to the SVBG and thus to environmental and medical science more widely; a specially commissioned piece of art will complement this. Community events will share findings and materials with people in St Vincent, and the Garifuna and African Caribbean communities living in New York and the UK.

The project will publish academic articles in both environmental science and the humanities as well as develop a set of best practice recommendations to guide future environmental scholars when reworking publications and theories developed in colonial contexts, to better detect and appreciate the contribution of traditional knowledge systems. The recommendations and findings will be shared among scholars from many disciplines. Finally, a book detailing the hidden histories of Anderson’s archive and SVGB will be written.