Dr Phil Marter, Senior Lecturer in Applied Archaeological Techniques in the University's Department of Archaeology and Anthropology, is a member of a specialist research team which has unearthed the remains of a World War II Spitfire from a field in Lincolnshire. Phil recounts the story of the crash in 1940 and how the recent excavation has provided invaluable evidence about what happened.

On 4 July 1940, Spitfire pilot Sgt Emrys Lewis had been taking part in a patrol searching for enemy aircraft in the run up to what later became known as the Battle of Britain. As he was returning to his RAF base, his aircraft plunged from the sky in a steep dive and crashed in a field in Lincolnshire, killing him instantly.

Some 77 years later, on 16 November 2017, a multinational team of aviation archaeologists gathered at the crash site to record and recover the remains of Sgt Lewis's Spitfire N3924.

The work was the culmination of a research project that had followed the story of the aircraft and its pilot through their training and operational experience. Led by Gareth Jones, the researchers included a small team from the University of Winchester's Archaeology Department made up of myself and two students, Will Reid and Mike Mann (pictured centre left and centre right above).

On the day of the crash, Sgt Lewis was flying at 20,000ft alongside two other experienced pilots from RAF 222 Squadron based at RAF Kirton Lindsey, near Lincoln, when they began to descend through the cloud. Eye-witnesses report seeing the aircraft exit the cloud base at around 5,000ft, in a near vertical dive. The aircraft was then reported to have hit the ground at full speed outside South Owersby.

The crash site burned for several days and the present farmer's father recalls an RAF recovery team removing the body of Sgt Lewis and clearing up the majority of the wreckage. Sgt Lewis was buried with full military honours on 11 July 1940, in Llandinorwig Churchyard, Caernarvonshire, Wales.

Our research project aimed to gather all the available evidence to complete the story of this incident, to shed light on the final moments of the crash and try to understand what might have happened to cause it. We also hoped to bring closure to Sgt Lewis's family, who knew little about his fate and had not known the location of the crash.

We worked with the Ministry of Defence and Sgt Lewis's relatives to complete a successful licence application to explore the crash site under the terms of the Protection of Military Remains Act 1986. We hoped that the project would ensure that the site had been successfully cleared during July 1940 and that the family would have a chance to see where the crash occurred.
We pinpointed the precise position of the crash site by geophysical survey before clearing an area of ground by machine.

It soon became clear that much of the wreckage had already been removed by the original RAF team, but a propeller blade, cockpit components - including dials from the instrument panel - and the almost intact Rolls Royce Merlin engine remained. We recorded these carefully and lifted them from the site.

On the second day of the fieldwork we were joined by members of Sgt Lewis's family. Lewis was the uncle of Beryl Wilson (now aged 82), who travelled from her home in Liverpool to see the crash site, along with her two daughters, Karen and Janet, and other relatives from Canada. 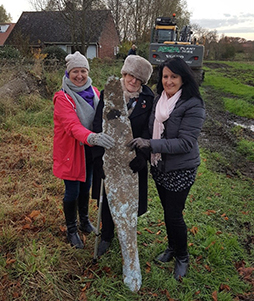 Family members were able to experience the crash site and handle objects from it, an experience that somehow enabled them to renew a lost connection with their much-loved relative. The occasion was marked by a minute's silence, the laying of flowers and a tribute flypast by another MK1 Spitfire from Duxford. As the Spitfire passed overhead and completed a victory roll, Sgt Lewis's family were clearly as moved as the rest of the team at witnessing such a poignant moment.

We are continuing to piece together evidence from archival research and from the crash site itself to complete the story of Sgt Emrys Lewis and his Spitfire. The engine from his aircraft will be restored and displayed as a testament to his sacrifice and others like him, who paid the ultimate price for their service.

A team from Blink Films were on site to capture the occasion as part of a documentary to be aired early next year. The work was also featured in local and national press.