Here's a roundup of our latest research news, from a new study into the positive impacts of music in care homes, to awards, prizes and new publications.

Live music should be essential in all care homes in the UK because it has a significant and positive impact on older people, care staff and care homes as a whole. This is a key recommendation in a major new national research report led by the University of Winchester and charity Live Music Now.

Dr David Walters, Director of the University's Centre for the Arts as Wellbeing, said: "These findings add to a growing body of evidence and provide key recommendations as to how music making can implemented in care homes. The report offers an effective, sustainable approach to providing meaningful and beneficial activities that can enhance the quality of live in care for both residents and staff." Find out more.

The report and a four-page summary are available at: www.livemusicincare.org.uk

The report is the result of a study supported by 35 national organisations in the social care and arts sectors, working together since 2015 under the banner 'A Choir in Every Care Home'. The partners share a vision to inspire and support UK care homes to introduce more and better music engagement for older people. Watch the ITN film above about the project (copyright Care England).

There is an urgent need for regulatory and oversight mechanisms as machine learning tools are used for policing purposes, argues a new report published by the Royal United Services Institute, jointly authored with the University of Winchester.

Marion Oswald, Senior Fellow in Law and the Director of the University's Centre for Information Rights, and Christine Rinik, Senior Lecturer in Law, were co-authors of the collaborative report exploring the legal, ethical and regulatory challenges of using machine learning algorithms in police decision-making. Find out more.

The University's impact is extending to Australia's schools, with the launch of a new report - titled The Capable Country - about building capabilities through education.

Bill Lucas , Professor of Learning and Teaching and Director of the University's Centre for Real-World Learning, was commissioned by the Mitchell Institute, Victoria University, Melbourne, to offer research-based policy recommendations relating to how Australia can embed their capability and character-led curriculum, with an emphasis on capabilities such as critical and creative thinking. The report has been well-received and a number of its recommendations are expected to be adopted. Find out more and read the report.

Bill (pictured above with Dean Catherine Ogle, Winchester Cathedral, left, and Professor Joy Carter, Vice-Chancellor) was recently appointed Learning Adviser to Winchester Cathedral, a role which will see him act as a 'critical friend' in all aspects of formal and informal learning, from tours and visits to exhibitions. Find out more.

Future of our planet explored in new book

A book inspired by the Extinction and Livestock Conference in October 2017 - for which the University was a key partner with Compassion in World Farming and WWF - is now available to buy.

Farming, Food and Nature - Respecting Animals, People and the Environment (Routledge) brings together the best thinking from the Conference, with new contributions from experts on insects as food and feed, clean meat and fish farming. It reveals the latest scientific evidence, case studies, detailed reviews and potential solutions to save our planet from the devastating impacts of intensive livestock production.

Professor Andrew Knight, Director of the University's Centre for Animal Welfare, has contributed a chapter outlining the case for veganism. Find out more. (Image courtesy Compassion in World Farming) 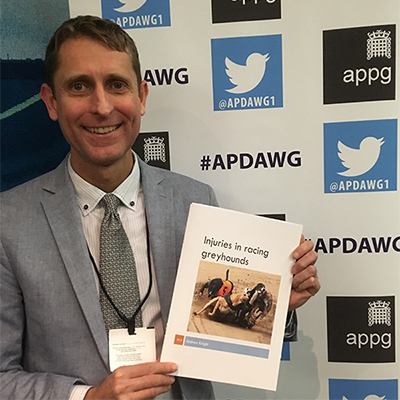 Andrew Knight, Professor of Animal Welfare and Ethics, was on the expert panel at the All-party Parliamentary Dog Advisory Welfare Group (APDAWG) meeting at the Houses of Parliament on 30 October. The meeting focused on welfare issues in greyhound racing and Professor Knight released his new report Injuries in Racing Greyhounds. Find out more about the APDAWG meeting.

International honours for Professor of History of Education

Professor Joyce Goodman has been honoured by the two key international organisations in her discipline, education and the history of education.

Joyce received honorary life membership of the International Standing Conference for the History of Education (ISCHE) as part of the organisation's 40th anniversary celebrations. She is only the second woman to be given this honour. The laudation setting out her achievements says: Modest in demeanour but titanic in her intellectual projects, Joyce Goodman has also made her mark on ISCHE through her scholarship. Her interest in women's education and issues of identity led her to explore with theoretical sophistication insights gained from the linguistic turn in women's history and the imperial turn in the social sciences.

Tribute to the Winchester fallen of WWI

A new book, edited by Emeritus Professor of History Tom Beaumont James and published to coincide with the 100th anniversary of the end of the First World War, commemorates the sacrifice of those men of Winchester who lost their lives in the conflict.

Winchester men served and died in all three services and came from all walks of life, including regular servicemen, the MP, teachers, the most decorated cricketer to die in the Great War, shop assistants, and members, including a goalkeeper, of the Winchester City football team among over 450 others. The largest number of deaths came from Wales Street and The Brooks, while the greatest mortality in a single family were three from the Cox family of Culver Road.

Dr Martina Hutton, Senior Lecturer in Marketing in the Faculty of Business, Law and Sport, has secured two research funding awards for a new research study.

Both awards are highly prestigious within the consumer research discipline, representing learned societies within the UK (Academy of Marketing) and globally (ACR). Recognition for, and investment in, projects by these awarding bodies is significant.

The study, Narratives of Vulnerability: Disrupted and Unequal Consumption Lives of Ex-Offenders, will explore system-wide economic and social barriers for ex-offenders. Martina's research focuses on how individuals make sense of and cope with the dominance of consumer culture in the face of poverty, inequality and austerity.

The judging panel's citation praised the 'exemplary' study, saying: The paper was scholarly, fluent and academically robust and the methodology was innovative, encouraging children themselves to participate in developing the research tools and so actively being agents in the development of transition practice in their school.

Megan, who teaches at Netley Marsh C of E Infant School in Southampton, has also been awarded the TACTYC, Association for Professional Development in Early Years Student Reflections Award for her paper titled Listening to children creates Better Beginnings. Megan's paper can be read here.

Another centenary is remembered in Women's Legal Landmarks: Celebrating the history of women and law in the UK and Ireland (Hart Publishing) which commemorates 100 years since women's admission to the legal profession in 1919.

Dr Emma Nottingham, senior lecturer in the Department of Law, is one of more than 80 authors who wrote about landmarks that represent a significant achievement or turning point in women's engagement with law and law reform. Emma's chapter focuses on the House of Lord's 1986 decision in Gillick v West Norfolk and Wisbech Area Health Authority that girls under the age of sixteen could lawfully make autonomous decisions regarding medical matters and access advice and treatment from a medical professional confidentially, without their parents' knowledge or consent. Find out more about the book which is published next month.

Emma has recently been awarded her PhD from the University of Southampton, which focused on the landmark Gillick case.

Maria Burke, Professor of Management in the Department of Digital Futures (pictured above right), led a workshop on the ethics of artificial intelligence at the Portsmouth Catholic Diocese symposium 'Science - or - Religion?' which took place at the Winchester Discovery Centre on 3 November. Physicist Professor Brian Cox was one of the keynote speakers. Find out more, see photos of the event and listen to Maria's workshop here.

(Photo by Ana Dobeson, courtesy of the Portsmouth Catholic Diocese)

Is internet access a privilege? Or should being able to access the digital services now so central to our day-to-day lives be considered essential? Marcus Leaning, Professor of Digital Media Education, discusses the societal importance of internet access and how access differs across the world. Read the post or attend Marcus' inaugural lecture on 29 November to hear more.