On Monday 5 March Philip Mansbridge delivered a public lecture hosted by the Centre for Animal Welfare. It was an excellent lecture that provided a broad overview of the history and campaigning of the International Fund for Animal Welfare (IFAW), before focusing on the innovative use of modern technology to combat elephant and rhino poaching in Africa. In this short blog, I summarise Philip's message about IFAW's work, with some of my own observations along the way.

IFAW victories include ending the commercial hunt for whitecoat seals in Canada and the EU trade ban on seal products in 2009. Photo courtesy of IFAW UK.

IFAW was established in 1969 and grew out of a campaign against the Canadian seal hunt. Many will be aware of the graphic images of young seals being killed for their fur in Canada. These powerful images of young seals being bludgeoned to death, with the copious red of blood staining the brilliant white ice that was their natural habitat, seem to convey a message that the practice is morally wrong, simpliciter. Indeed, the EU - that most progressive of political unions - has prohibited the trading of seal fur and products within its civilised borders. We have the work of IFAW, amongst others, to thank for such moral progress.

In his lecture, Philip Mansbridge described the ways in which animals matter. Animals have their own value, but they matter also to people and the planet. IFAW is one of the few NGOs concerned directly with animal welfare and conservation. Indeed, that very day in our BA Animal Welfare class we had discussed the relation between environmental ethics and animal ethics.

John Baird Callicott, in a seminal 1980 paper, argued that animal liberation and environmental ethics were theoretically distinct. Callicott supported a more holistic environmental philosophy based on Aldo Leopold's land ethic. Later that decade, however, he revised his views, in a paper called Animal Liberation and Environmental Ethics: Back Together Again. Arguably, Callicott's second paper is more defensible, along with IFAW's position, which recognises the interconnectedness of a progressive environmental ethics with respect for sentient animals. 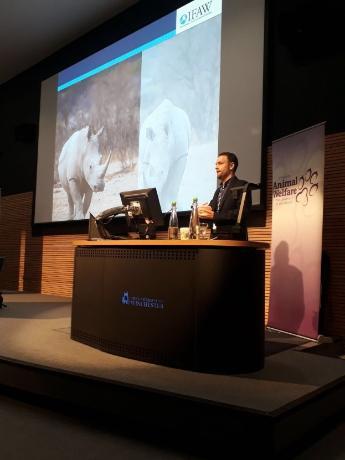 The IFAW UK Director went on to describe how IFAW is an international organisation that employs local staff. It harnesses an international network of contacts in government, environmental agencies, business etc for maximum impact. IFAW has the following five priority areas:

In terms of animal rescue many will remember Hurricane Katrina in the US and those owners forced to abandon cherished pets to a likely miserable fate. In this area, IFAW plays a key role proving veterinary and other expertise and, more importantly, building capacity to better cope with the next disaster. Controversy surrounding Hurricane Katrina led to US Congress passing the Pets Evacuation and Transportation Standards Act.

Wildlife crime is a $20 billion dollar business per annum and constitutes the fourth largest black market globally, after drugs, human trafficking and counterfeit trade. IFAW is involved in political lobbying, demand reduction and building bonds and trust with local communities.

For landscape conservation, IFAW promotes sustainable livelihoods. Human development is often associated with destroying natural habitats and, after all, wild animals need a place to live just like humans do. IFAW's work, for instance, promotes the protection of wildlife corridors, a passage of relative safety around human land use for the wild animals we share the world with.

Community animals are 'loosely owned animals', for instance dogs in parts of Asia are fed collectively by the community. Despite the loose ownership, individuals are unlikely to pay for vet treatment, which furthermore is often not available. IFAW works to avoid conflict between the human community and what Donaldson and Kymlicka have called liminal citizens: animals that are neither truly domesticated and owned nor wild animals. When a community dog bites an individual, for example, the authorities often crack down harshly with a widespread cull. IFAW lobbies to prevent such outcomes, and supports community based solutions which can include vaccination, education, neutering, vet care and more.

In marine conservation, IFAW works to protect whales from ship noise and ship strikes. Philip Mansbridge explained how strikes are becoming more common as a result of globalisation and more shipping. Large ships sometimes even arrive in port with a dead whale across their hulls, which the crew were unaware of due to the size of the vessel. This means a depressing end to the voyage all round.

These areas of work show how IFAW lives up to its name in being a truly international organisation. It also lobbies to protect wild and pet animals closer to home in the UK. IFAW campaigns against the badger cull, illegal so-called trail hunting, and puppy sales. Indeed, in Animal Welfare Impact Assessment and the Ethics of the Great British Badger Cull, the Centre of Animal Welfare at the University of Winchester has published a significant body of work, which supports the lobbying efforts of organisations such as IFAW.

One of the standout features of Philip Mansbridge's presentation was the use of audiovisual material. To illustrate IFAW UK's campaign on puppy farming, Philip showed us IFAW's tailor-made video Introducing Suzy Puppy. IFAW produced the video, which is intended to shock, in conjunction with J Walter Thompson London. The video starts with a young girl overjoyed with her new pup Suzy. The video, however, quickly turns much darker as the narrator explains that: "Suzy comes with the deadly Parvovirus.... and conjunctivitis, and look, diarrhoea".

The viewer is treated to a rear view of Suzy passing ice-cream like diarrhoea, a symptom of Suzy's Parvovirus infection. Suzy is later buried in the owner's garden, and the viewer is entreated to not "unwittingly support cruel puppy farming", of which Suzy is a product. The take home message is to always remember P.U.P.S.: Always meet the Parent; Is it Underage?; Check its Papers; Check the pup for Sickness. Philip Mansbridge called on the Winchester audience to sign up the government e-petition to Ban the sale of puppies by pet shops and all commercial third party dealers. These are unnecessary practices that support puppy farming.

As a veterinary surgeon I have euthanased dozens of young puppies infected with Parvovirus. The video, though shocking, unfortunately conveys an all-too-realistic story. Of the P.U.P.S. rules, do make sure you see the Parent (bitch) and don't buy a puppy without seeing the mother. Walk away if you have any bad feeling about the place; taking a puppy out of such an environment unwittingly supports the trade.