November 2017 at the University of Winchester

As the days got chillier and evenings got darker, the campus continued to buzz with a huge variety of activities.

November highlights included a television appearance, a campus visit by Japanese universities, charity fundraising and a multitude of awards and achievements for staff, students and the University.

We shone an orange light to end violence against women 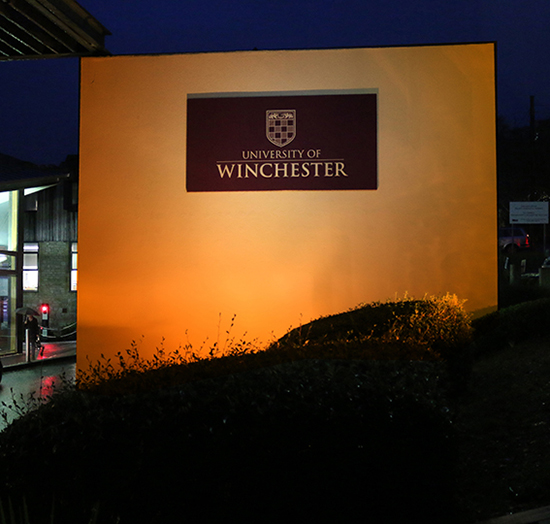 For ten days from Saturday 25 November, we shone an orange light on our entrance sign on King Alfred Campus to mark the United Nations International Day for the Elimination of Violence against Women.

Brenda Sharp of the University’s Institute for Theological Partnerships said: “By shining an orange light here at the University to mark the UN campaign, we hope to help highlight gender-based violence and encourage action to end it.”

The light will continue to shine until International Human Rights Day on 10 December.

The University was strongly represented this year at the Winchester Short Film Festival, with two films showcased during the event.

From Here On In was created by six students from our Film Production degree programme. The film is a character-driven story about an estranged brother and sister, forced back together after the death of their grandmother, and how they come to terms with each other after an extended time apart. See a trailer for the film below

Black For A Cause, a short documentary film directed by Stephen Thompson, Creative Writing (https://www.winchester.ac.uk/study/undergraduate/courses/ba-hons-creative-writing/ ), was also screened during the Festival. The film centres on miscarriage of justice.

Both films were also nominated for the Hampshire Prize award, which is dedicated to showing the best work from those that have lived/studied in the Hampshire area for more than six months.

The University was recognised for its dedication to sustainability with two awards at the Green Gown Awards 2017.

The second award was given to the University’s independent record label, Splendid Fred, for its innovative album This Changes Everything. All 11 songs featured on the album are themed around climate change and written and performed by students.

Listen to the album below:

We forged new links with Japan

We welcomed a British Council delegation from Japan this month.

As part of the visit, 18 senior staff from leading universities across Japan spent the afternoon touring King Alfred Campus. The visit offered an important opportunity for the University to develop global partnerships and encourage international exchange between the two countries.

A Winchester Classical Studies graduate has secured a seven-month paid internship at the internationally-renowned Mary Rose in Portsmouth Historic Dockyard.

Natalie Bartlett works in the Museum’s Learning Department to support delivery of activities and sessions which cater to a diverse audience. She works with the Learning Officers to develop learning aids and activities to create fun and inclusive workshops.

Our support for the armed forces was recognised with an award 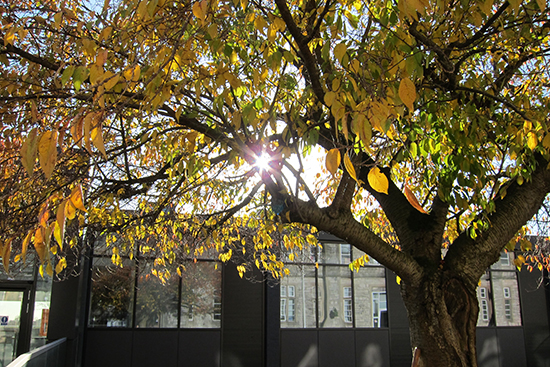 We received the Armed Forces Covenant Employer Recognition Bronze Award for our support for men and women who serve, or have served, in the armed forces and their families.

“The Armed Forces Covenant is a promise from the nation that those who serve, or have served in the armed forces, and their families, are treated fairly. Guided by our mission to educate, to advance knowledge and to serve the common good, the University signed the Covenant in 2016 to demonstrate our commitment to supporting military personnel, families and veterans,” said Colette Fletcher, Assistant Vice-Chancellor at the University of Winchester. “This Bronze Award recognises our success in the various initiatives we have launched.” 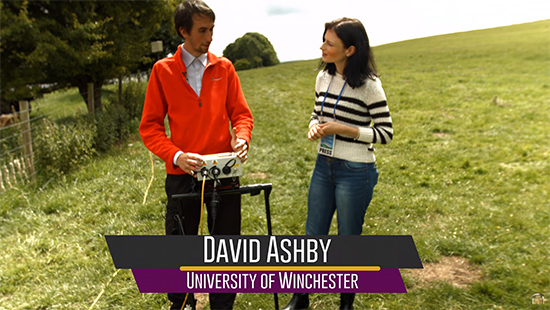 In the video, David – who is a technician in the Archaeology and Anthropology Department and is also studying at Winchester for a PhD in Archaeology, Anthropology, Forensics and Technology - teaches presenter Hayley how to use a Geo-phys machine for archaeological imaging: the machine can help find whether there are any standing structures left underneath soil surface.

Watch the video below on the Viral History channel.

We raised money for Breast Cancer Now and The 401 Foundation

We were delighted to announce that we raised £2,369.60 for Breast Cancer Now and £1,957.60 for The 401 Foundation. Our thanks to all those staff, students and family members who donated at our Graduation ceremonies in October and at our Wear It Pink celebrations on campus.

Our fundraising efforts for Breast Cancer Now were encouraged by Winchester academic Dr Denise Hewlett, Senior Fellow within the Department of Responsible Management and Leadership, who was diagnosed with breast cancer earlier this year and is undergoing treatment. Denise has written about her experiences for Wear It Pink and is blogging about her journey on Facebook. She hopes to increase awareness and provide support to others in a similar situation.

The 401 Foundation was founded by Ben Smith - who back in September 2016 set off from the University of Winchester to run marathon 394/401. The Foundation provides grants to organisations and individuals that build confidence and self esteem whilst tackling mental health and self development issues. Our Assistant Vice-Chancellor, Colette Fletcher, is a Trustee. 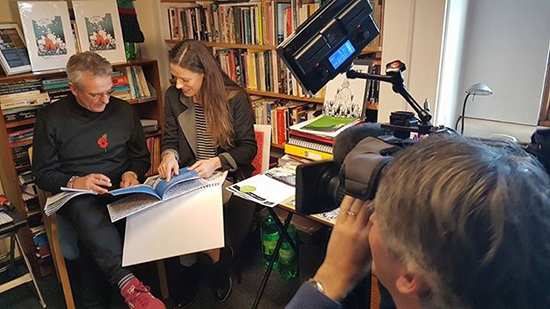 A Winchester academic recently launched a new children’s book which tackles the subject of immigration.

The Boat Story was written by Andrew Melrose, Professor in Children’s Writing, and features illustrations by local artist Stephanie Morris. The book, which follows the journey of a refugee baby who sets sail on a boat to find a better life, looks to aid children in seeing the humanity of those escaping from adversity.

The book launch was covered by BBC South today. In addition to filming on campus, the BBC visited Four Lanes Community Junior School in Basingstoke to film the book being used in a classroom setting. Huge thanks to the school for making the report possible.

Catch up on the segment here:

Amanda MacKenzie, Chief Executive of Business in the Community at the Prince’s Responsible Business Network, shares her vision for responsible business in our blog highlight this month.