IFAW's Big Ivory Surrender started in the summer of 2017 in the UK. Almost 500 ivory items - weighing about 150 kg - were donated by the British public and destroyed by IFAW. A YouGov poll shows that 95 per cent of the British public are not interested in owning antique ivory. A government e-petition achieved the threshold of 100,000 signatures and was debated in Parliament. Lobbying contributed to the minority Conservative government to consult on a proposed ban in early 2018.

Over 20,000 elephants are killed annually in Africa. The Great Elephant Census revealed a 30 per cent drop in the population of this iconic species. One elephant is killed by poachers every 25 minutes - meaning that two living elephants would have been slaughtered during Philip's lecture to promote the protection of the endangered species that this blog is based on.

IFAW's philosophy of approach is not to demonise poachers and, as an international organisation, it aims to understand the local context as much as possible. African communities can come into conflict with elephants which pose a threat to the food security of local villagers. However, the elephant should be seen as a long term asset and locals are supportive of NGO attempts to protect the species.

A more serious problem, however, are organised criminal networks poaching elephants for their tusks, which are traded as ivory by international networks. The poachers themselves, like drug mules, are the small fish. The bigger players control the shipping of the ivory and make big money out of the illicit operation. Philip Mansbridge, aided by IFAW UK Head of Policy and Campaigns David Cowdrey, demonstrated how the organisation uses modern technology to combat poaching.

Traditionally, anti-poaching measures have been reactive. In response to an elephant being reported as killed, patrols are stepped up in the local area. However, the poachers simply move away from this area and exploit a new area. They are one step ahead of the rangers armed to protect the elephants.

The IFAW UK Director described how military intelligence is used to combat poaching. Operation TenBoma aims to get 'left of kill', a military phrase that means preventing killing before it happens. Grass roots intelligence, which is considered the strongest weapon against poaching, is harnessed by developing networks.

Computer software and hardware, together with satellite data, is used in the fight to protect the species. It is, in effect, a Counter Poaching Revolution, inspired by the work of a colleague with 15 years' experience in military intelligence. Intelligence to disrupt terror networks is applied to save endangered elephants.

In this military-like set up, a command centre receives satellite and other data from multiple sources. Intelligence is shared and threat analysis is conducted. The aim is always to get 'left of kill', to catch the poachers before they kill, not after. The IFAW UK team showed a fantastic video (see above) of the tenBoma operation, which is well worth watching. In the first part, a duo of poachers is seen graphically shooting an elephant. The scene is then rewound and the military operation results in rangers ambushing the poachers. The majestic elephant in the firing line lives to range another day.

In parallel with the military approach, IFAW UK has worked with Kings College London and the Metropolitan Police in the development and distribution of a high tech finger printing kit. The kit permits agencies to determine the finger prints on the ivory to facilitate catching the bigger fish further up the chain. The finger printing kit was demonstrated on a willing member of the audience by the IFAW UK team. 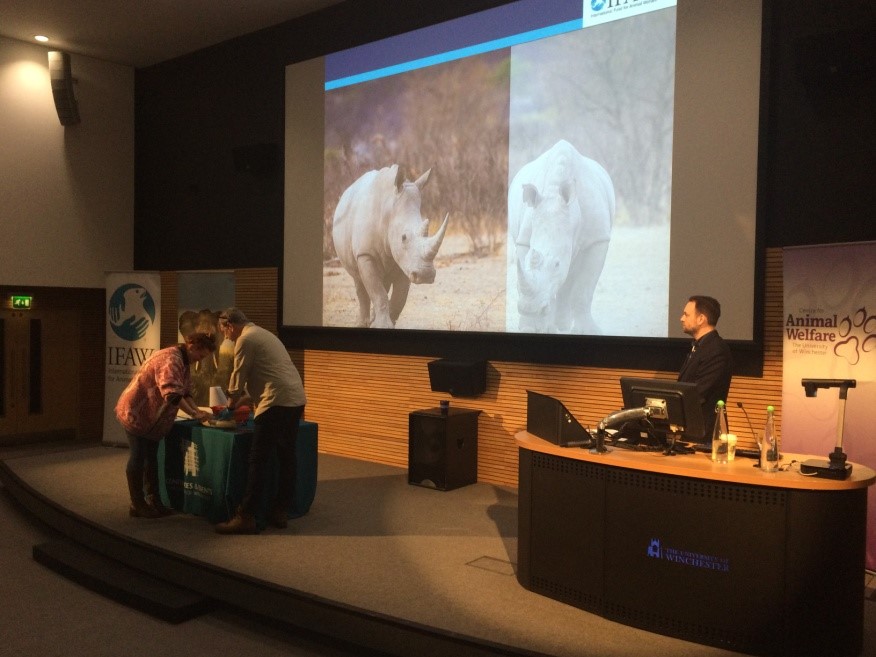 The IFAW lecture focused more on work with elephants. However, the existential threat is as relevant to the rhino as it is to the elephant. Over the last ten years, around 7000 rhinos have been killed for their horn, which is considered by some to have medicinal properties. IFAW's position is that any trade in rhino horn endangers the species. Indeed, the threat to rhinos based on trading their horn is not confined to wild and farmed rhinos in Africa. In 2017, IFAW reported on the shocking incident of three white rhinos being killed by one or more poachers in Thiory Zoo, France.

You can get involved in IFAW's work protecting elephants, rhinos and other species in various ways by visiting its website.