Women, Equality and the Legal Profession

In November, Christina Blacklaws, President of the Law Society of England and Wales, delivered a lecture at the University of Winchester on the role of women in the law, the impact of technology on access to justice and the future of the profession. Charley Dugdale, LLB (Hons) Law student and President of the Winchester Student Law Society, shares her thoughts on the talk and explains why reality is better than fiction when it comes to the legal profession.

When you hear that someone is studying for a law degree, does your mind wander to images of the popular television characters Harvey Spector and Annalise Keating? The world of law is often unnecessarily glamorised by the media, and tv shows like Suits and How to Get Away With Murder often depict unrealistic representations of the profession.

The reality of practicing law is very different. Rather than being pondered over with a glass of whiskey in stunning city view office space, legal issues are more often mused over in crumbling court buildings and facilities that appear as if time has stood still within.

The recent times of austerity have seen cuts aplenty, but, whilst people passionately care that the roof of their child’s school is not leaking and that the police will attend when called, there is less emphasis on protecting everyone’s right to access legal aid or advice.

In October 2018, The Law Society of England and Wales stated; ‘Justice is as important to most people as health and education, but only 20% think there is sufficient funding in place for those who needed legal advice.’[1]

The Law Society aims to change this. As an organisation, it exists to represent, promote and support all Solicitors so that they, in turn, can help their clients. They also work to ensure that no-one is above the law and to protect everyone’s right to have access to justice.

In July 2018, Christina Blacklaws, a solicitor who qualified in 1991, became the 174th President of The Law Society and, in doing so, became just the 5th woman to hold this position.

When asked to share some great advice, Christina chose words from her mother; ‘Work hard and be nice to people.’ Simple and wise words. Christina showed she truly believes in this mantra when she delivered a talk here at The University of Winchester.

One topic that Christina focused on in her talk was the role of women in the legal profession. We see many strong female leads in legal dramas, but, in reality, the balance of men and women in positions of power is skewed. Women make up far less than half the Partners leading law firms in the world and a recent article in The Independent proclaimed that more people called David and Steve lead FTSE 100 companies than women.[2] This is where Christina bucks the trend. She has managed several leading law firms including a virtual law firm. More recently she took up post as the Director of Innovation at leading law firm Cripps LLP.

A central theme of Christina’s presidency is to promote and support gender equality in the legal sector with a focus on women in leadership in the law.

This is something the University is proud to be taking strides towards. Christina’s talk at the University was jointly hosted by The Centre for Information Rights and the Winchester Student Law Society, both of which are headed by women. For the last three years, the Winchester Student Law Society, which I am currently President of, and the Mooting Society have all been led by female students and the Centre is run by Marion Oswald , Senior Fellow in Law. This reflects an increase in women studying law and entering the profession at entry level. This shift in trends - and the rise of positive female role models in law such as Christina and Lady Hale, President of the Supreme Court - are encouraging. But it’s very clear that there is much more than can be done to bridge the gap. 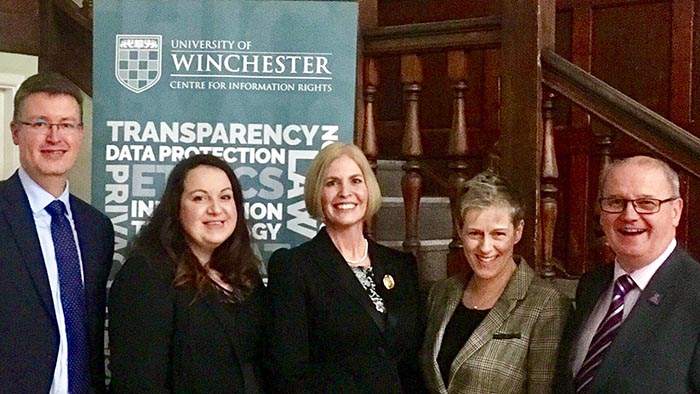 Equality and the law

Speaking on the topic of equality in law, Christina discussed the looming crisis associated with the potential decline Criminal Duty Solicitors. Those that undertake this role offer a vital public service. If the numbers decline as predicted, this could leave many individuals unable to access their right to a solicitor and/or free advice if they find themselves in police custody. The mean average age of a criminal duty solicitor across the whole of England and Wales is now 47 and, in Hampshire alone, of the 136 we have, 76 of them are over the age of 50.[3]

Maintaining access to justice is fundamental to ensuring that the rule of law is maintained and, with cuts to legal aid and the numbers of Criminal Duty Solicitors dropping, it’s refreshing to hear that the Law Society are prioritising these issues.

Technology and its potential to enable access to justice

There is clear evidence that providing legal aid for early legal help, particularly in housing and family matters, is far more cost-effective than denying it. However, the threshold for those eligible for legal aid means that it is out of the reach of many and this is unlikely to change in the near future. However, digital technologies may well provide a solution in this respect.

There is no hiding that Christina has a vested interest in the possible role technology can play in law, especially where access to justice is concerned. She is keen to explore whether technology can provide an online resource for those who find themselves in a position where they are unable to claim legal aid and/or cannot hire a lawyer. After all, if people cannot effectively enforce and defend their rights, then, for all practical purposes, those rights do not exist.

It’s prudent that we recognise at this point that, whilst these technologies may well hold the key to unlocking access to justice, this does not come without potential issues. The use of unregulated, and potentially biased, machine learning algorithms may pose risks to both equality and justice if used without care to make decisions in the justice system. This risk has been recognised by Christina and she identifies that the opportunities and the challenges presented by technology are some of the biggest issues facing our global society. This issue is one that forces us to address deep ethical and jurisprudential questions, and sparks fierce, often polarised, debate among legal professionals and the public alike.

The impact of Christina’s presidency on these issues will be quantified next year and, whilst it is clear there is a vast amount of work to do, her talk has demonstrated that she is leading the way for the next generation of female law graduates and professionals.

So, next time you hear a student is studying law, make an effort to think about the real figures (documented by the groundbreaking The First 100 Years project) who made a difference in the world rather than the fictitious world of impossibilities. Be sure to think of people like Gwyneth Bebb who brought the test case that opened the legal profession up to women. Think of Carrie Morrison, who was made to compete in a running race on Chancery Lane to claim the accolade as the first female Solicitor. Think of Christina and her ability to empower others to. Think of the law student and their future protecting the rights of the public. The reality of the law profession is infinitely better.